Detailed user guides to our features from your first API call to reporting.

New to the API economy, our entry level articles cover key definitions and what are APIs?

What is CASC Scoring?

CASC scoring deals with one of the challenges of understanding what your Key Performance Indicators KPIs for APIs are telling you – how do you come to terms, easily and quickly with large amounts of data in a meaningful way. This has been recognized before with systems like Apdex, but these have been, generally, very simplistic approaches to dealing with the challenges of performance and quantifying it.

Building on the success of the ‘credit score’ in the financial sector, APImetrics have developed Cloud API Service Consistency (CASC) scoring to give a simple, at a glance, indication of the quality and health of a specific API or group of APIs and allow for easy, like-for-like comparisons between different systems.

What it means for you?

You can see at a glance how an API is behaving and how this compares to any other measured API, whether one of your own or that of your suppliers, your partners, and customers.

Most APIs are good APIs. A CASC Score of over 800 indicates few if any issues. Between 400 and 800, there are some issues that need to be looked at. And below 400? That means you are using or exposing a bad API that has very serious problems that need to be resolved as soon as possible.

And the CASC Score is an easy and transparent way of measuring whether an API is meeting its Service Level Agreement. Simply specify a CASC Score that the API must meet. If it’s higher than that for the period you’re interested in (a week or month), you know the SLA has been met.

Think of the CASC Score as a bit like a credit rating. We take all of the metrics we have for each API, blend them together, then compare the result against our unrivaled dataset of historical API test records. This gives us a single number that is automatically benchmarked against all the other APIs monitored by APImetrics.

As for how we do the blending and the benchmarking, well, that’s our little secret! You don’t expect Coke or KFC to give away their recipe, do you? But let it be understood that it does involve state of the art machine learning technology.

What does the score mean?

800-999 – Everything is looking in good shape, you should have minimal problems you need to look into.
600-799 – There are issues that will need looking into, and it’s likely you’ll have several significant incidents a month needing engineering evaluation and investigation.
599 or lower – This is a poorly performing API with significant performance issues over the course of a month. An API in this region can take multiple engineer years more effort to maintain than one operating in the ‘green’ zone.
Ready to go? Start your free trial

What is a CASC score? 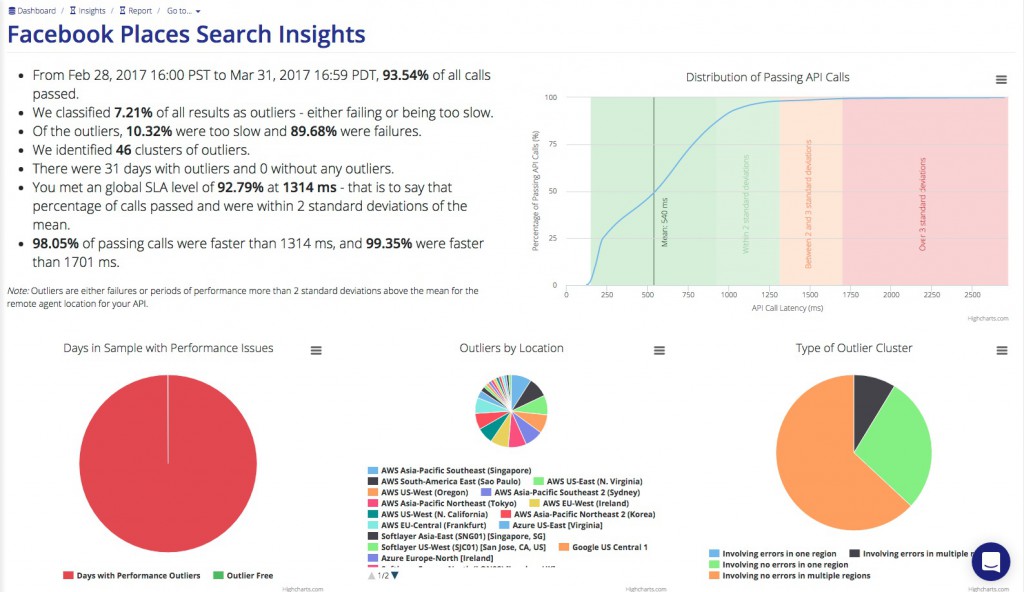