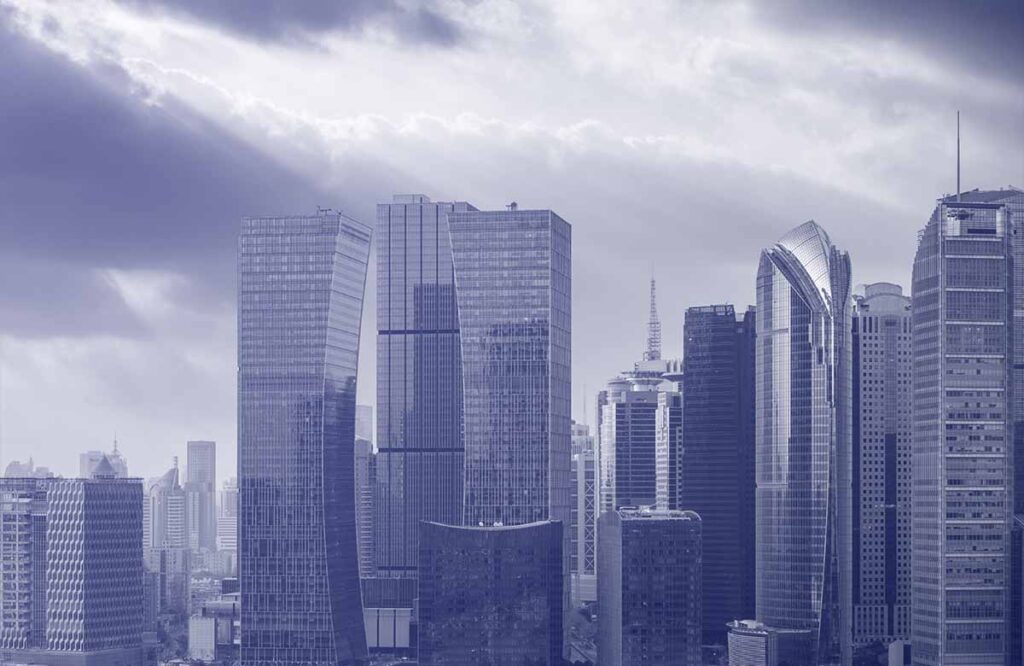 We look at over 100 APIs and pull all the metrics together to give you a general feeling for the service quality by way of API ratings in a particular category with a patented CASC score. Scroll down to see more1 But first:

Microsoft Office is a pretty strong API and, in particularly usually tops the API ratings category for Median Latency. 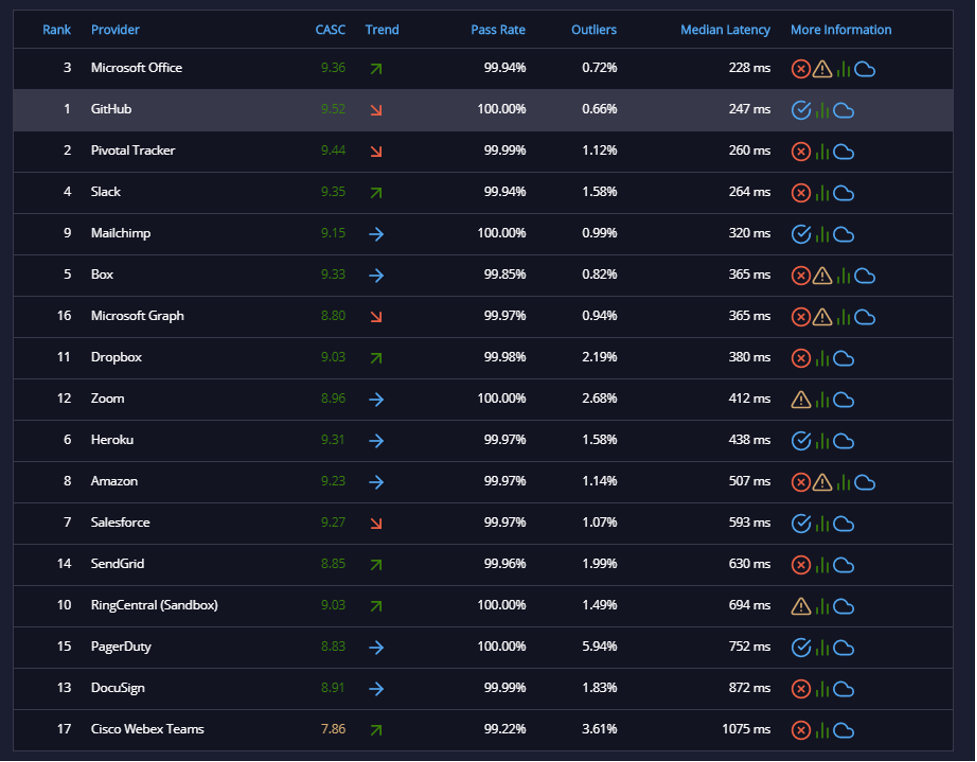 It’s quite a competitive category in terms of median latency, so being able to sustain the API ratings edge for an extended period is a good effort. 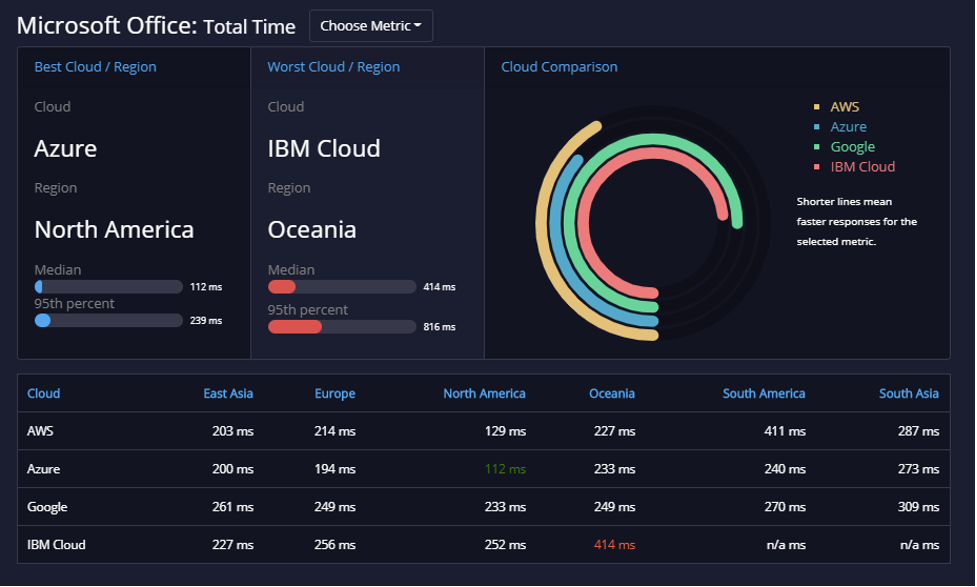 Azure is the fastest cloud in our API ratings for every region except Oceania, where AWS is better by 6 ms. Microsoft are likely to be satisfied that their own infrastructure is delivering in general. But they might want to have a look at what is going on in Oceania.

This is why it is so important to active monitor your API from the end-user’s perspective. It is easy to lull yourself into a false sense of security that everything is going well – when there might be a group of users who are not getting the performance they deserve or are losing out altogether. 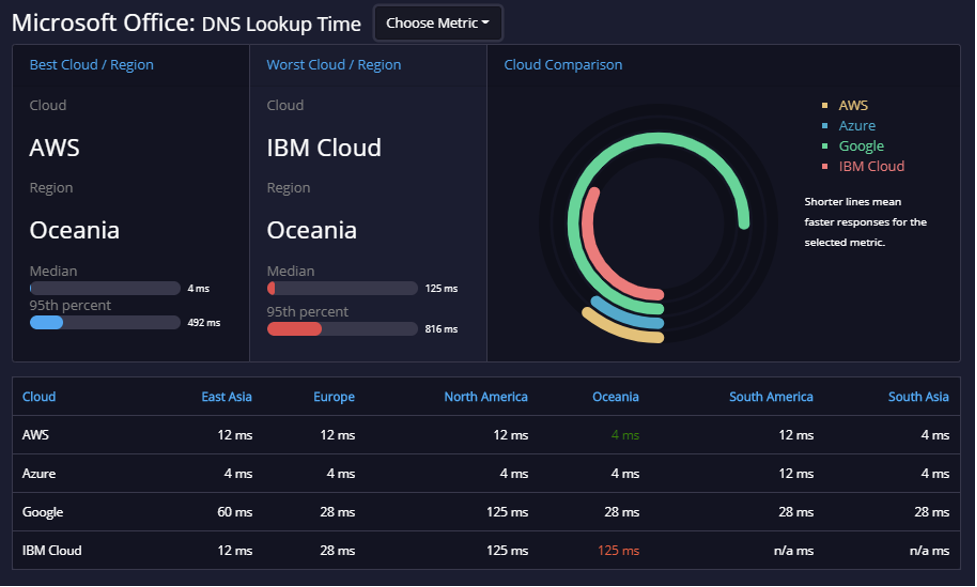 DNS Lookup Time should typically be 4 ms everywhere. Microsoft Office manages this in all regions except South America. But any users from Google and IBM Cloud in North America or IBM Cloud in Oceania are going to get a nasty hit from DNS, one that isn’t needed.

A slow region or cloud won’t affect the overall median latency as far as our API ratings go, but it will affect the users in that region or cloud. That’s why you been to break things down to get to the granularity that tells you how the API is really behaving. 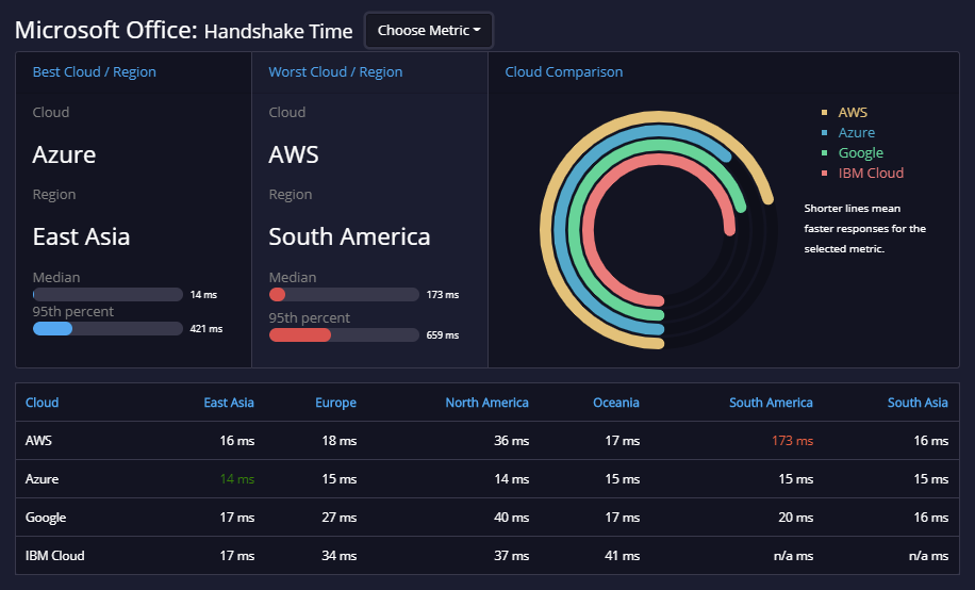 Azure is again fastest for all regions for Handshake Time, but there’s a nasty surprise for AWS users in South America. That’s the kind of surprise that might not be your fault, but for which you might get the blame.

Obviously, Microsoft probably would prefer that applications calling the MS APIs are built on the Azure stack, but this is something to be aware of because that will not always be possible.

Department of Justice in the US Government takes the overall API ratings title again with a median latency of 49 ms compared to 47 ms last week. An important caveat: medians can be misleading! An API might have a fast median latency but produce many slow outliers. These won’t affect the median, but they mean that users can experience many calls that were unacceptably slow. So just being fast isn’t everything. You have to be reliable too if you want to have good APIs and get a high CASC score!

Coronavirus Data API (thevirustracker.com) in the Covid-19 category takes the overall Wooden Spoon with a CASC score of 6.72. We launched API.expert earlier in the year as a simple way to provide everybody with insights into the API economy and the leading APIs in different categories in particular. We are expanding our coverage of Open Finance APIs from around the world, so one of the major changes we made recently to these round ups has been to pull out the financial APIs. See you again in a week as we look at the State of the APIs as we delve deeper into November. Also don’t forget to look out for our monthly report for October and the weekly and monthly financial API reports.