Cryptocurrencies are having a bit of a moment (again). That’s a reason why you need your exchange to be absolutely on the top of its game. Of the 22 cryptocurrency APIS, we monitor, 14 are in the Green Zone, but only 2 have CASC over 9.00. Being in the Green Zone is fine, but you shouldn’t rest on your laurels. You should aim to consistently have a CASC score of over 9.00. 7 AOIs are in the Amber Zone and are in need of some attention. Given the competitive and dynamic nature of the cryptocurrency market right now and the dependency of cryptocurrency exchanges on their APOIs, being in the Amber Zone is somewhere you simply can’t afford to be. 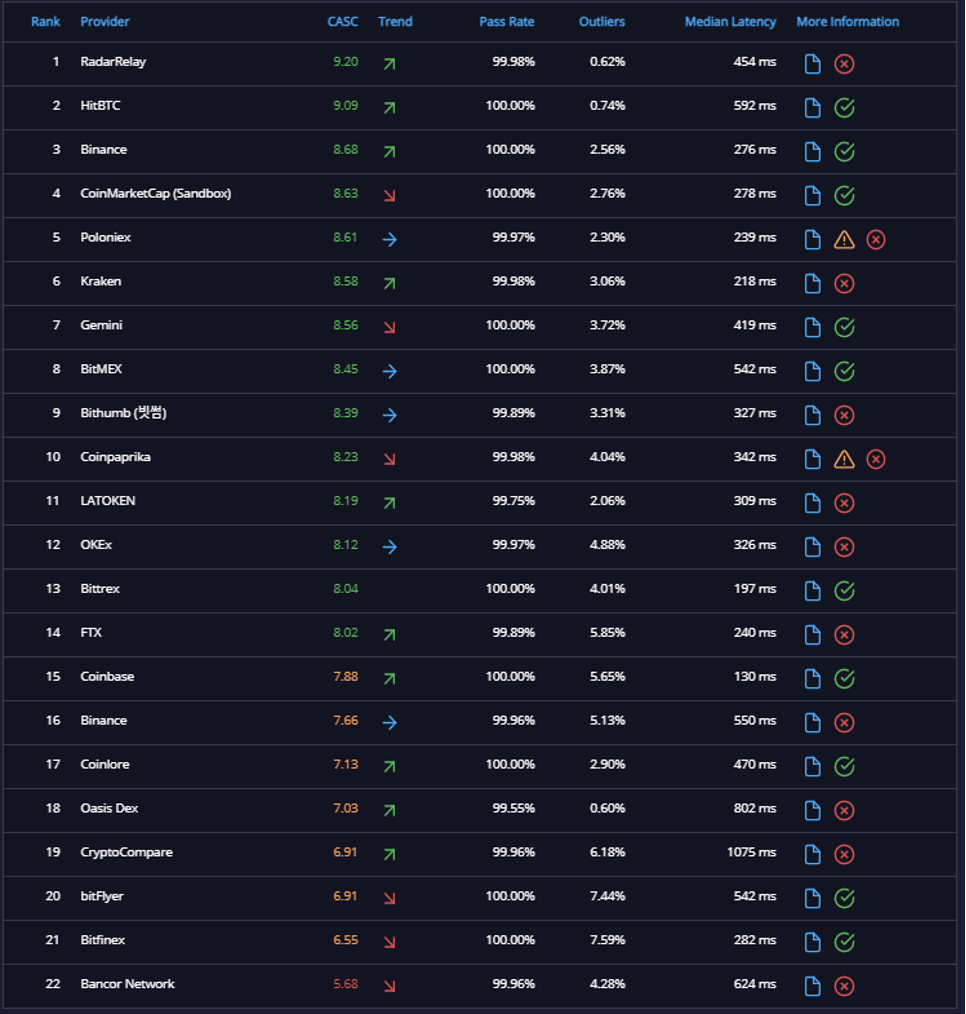 And Bancor Network, the only Red Zone API this month, is an example of an API where a couple of bad days meant a bad month. They had a lot of slow outliers on 16-17 February. If you use an active API monitoring systems, you can dig down into each individual result to see what was going on. All of the calls were returning a HTTP status code 200, but were, in fact, timeouts.

The message being returned was

which is an error code and thus should be associated with a 5xx HTTP status code, such as 503 Service Unavailable or 504 Gateway Timeout.

This is a severe error, which suggests either a SOAP backend is still being used (in 2021?) or that the backend has not been implemented correctly. We have also observed the same issue in early March, so this is not an isolated problem for Bancor Network.

It is only by monitoring your API that you can proactively identify and deal with these issues before they affect your users – and starts costing you serious revenue. Don’t get tricked by 200 OK. Look into what your API is really doing.

HSBC in the Open Banking – UK – Open Data category takes the overall title again in January with a median latency of 91 ms, up from 86 ms in January. One thing that should be considered when looking at CASC scores. It's possible for an API to have periods of time when they are very fast but also periods when they are extremely slow. This means that users will very often have a sub par experience. You don't want to simply be fast from time to time. You want to be consistently running swiftly. It is not a good idea to rely on your fastest performance. Overall speed is the real issue.

Nationwide (Sandbox) in the Open Banking API – UK – Sandbox category takes the overall wooden spoon again with a CASC score of 3.81, up from 2.33 in January. See you again in a month as we look at the State of Banking APIs in March. Also look out for our weekly reports on Banking APIs and our weekly and monthly reports on non-financial ones. We will also be producing reports looking back at the year 2020 in APIs.