Social Networks is a pretty competitive category for API metrics, which is not surprising given the centrality of social networks in contemporary life. Six out of 10 APIs have a CASC score over 9.00, and all but one have a CASC score of 8.52 or more and thus firmly in the Green Zone. Only Reddit is languishing in the Amber Zone this week.

Twitter takes the API metrics title this week with a CASC score of 9.60, only 0.02 points ahead of Google, which actually has a better pass rate, outliers and median latency, so it is the standard deviation that’s pulling it down.

What’s going on there? 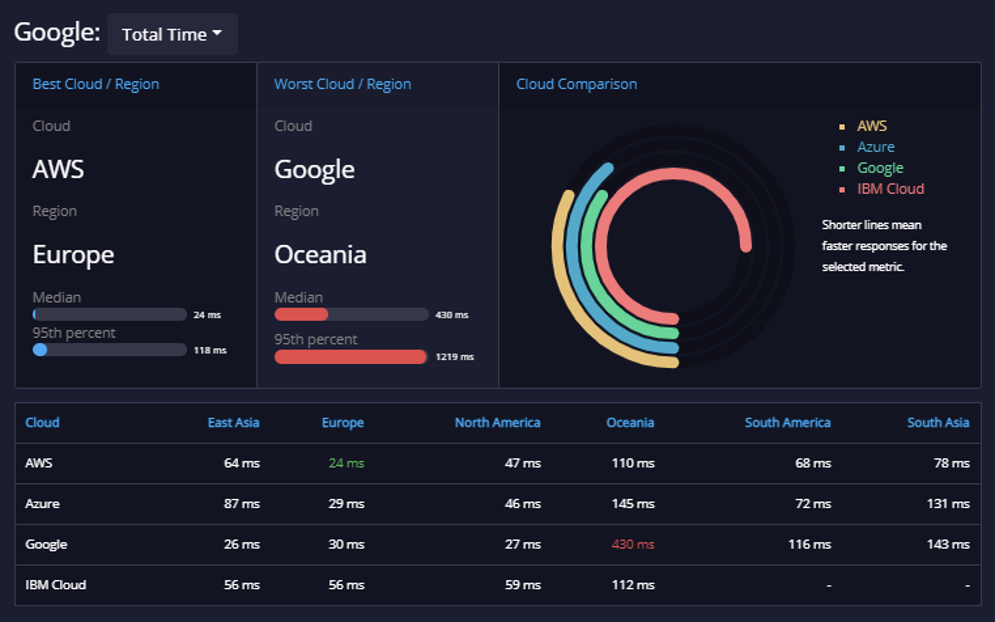 Straightaway, we can see a glaring issue. The slowest location is Google Oceania. Oceania locations often can be slow because of the region’s location, but AWS, Azure and IBM Cloud are about three times faster than Google for Google’s own API here, so something is definitely amiss.

Google in South Asia and North America are blisteringly fast with median latencies of 26 ms and 27 ms respectively and Europe not far behind at 30 ms. So South America, South Asia and, especially, Oceania, are badly out of kilter.

This is why you need to monitor your APIs actively because if you aren’t you don’t what kinds of problems your users are experiencing – and where those problems arise so that you can see straightaway where to start fixing them. 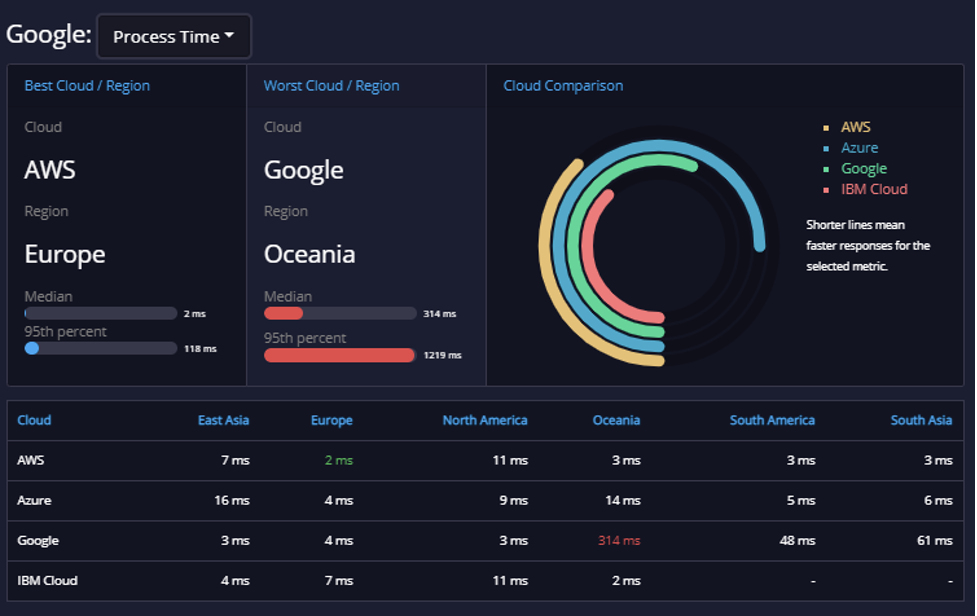 A look at Process Time immediately tells us where the problem is with Google in South America, South Asia and Oceania. For other clouds, Process Time is fast, just as we would expect for a quick API.

Indeed, Process Time shouldn’t typically depend on location unless there is a load-balancing architecture with multiple data centers. But there is very clearly something wrong if Google is picking up a whole 300 ms of extra latency because of the Process Time component (and tens of milliseconds in South America and East Asia).

Whether the problem is in fact with a network configuration (internal tromboning perhaps) or whether it is something to do with the local backends in those regions, this definitely needs resolving in order to make the Google Social Networks API the best it can be.

Bureau of Labor Statistics in the US Government category takes the overall title this week with a CASC score of 9.81.

Sustaining a CASC score of >9.25 over a period of several weeks is a good showing and congratulations to those organizations that achieved it.

This week, six out of seven categories are topped by an API with a CASC score of 9.34 or more.

Department of Justice in the US Government takes the overall title again with a median latency of 48 ms, the same as last week.

An important caveat: medians can be misleading! An API might have a fast median latency but produce many slow outliers. So just being fast isn’t everything. You have to be reliable too if you want to have good API ratings and get a high CASC score!

COVID-19 Statistics API (covid-api.com) in the Covid-19 category takes the overall Wooden Spoon this week with a CASC score of 4.92.

See you again in a week as we delve deeper into February. Also don’t forget to look out for our monthly report for January and the weekly and monthly financial API reports. We will also be publishing special reports on the State of the APIs in 2020, so that’s something else to look forward to!

If you have any questions, please don’t hesitate to reach out.