In 2020, we launched API.expert. This allows you to see at a glance how many of the leading APIs have been performing each week and month compared to their peer APIs.

The comparison uses our unique CASC (Cloud API Service Consistency) score, which blends together various performance to give a single number that sums up the quality of the API in a particular period. We were awarded a patent for CASC in 2020 (US patent no. 10,644,962).

It’s now time to look back over 2020 for each of the categories we examine.

We currently monitor 21 Corporate Infrastructure APIs. These APIs cover a range of basic business-to-business services that organizations use to carry out their day-to-day activities – from file sharing with Box and Dropbox to office productivity products such as Slack and Microsoft Office to bulk email providers like MailChimp and SendGrid.

Please let us know if there are any AIs you like us to add to this category.

In Corporate Infrastructure, the clear winner –with an excellent CASC score of 9.48 – is GitHub, which takes the title from Box.

Maintaining such a good CASC score over an extended period is an excellent performance from GitHub. Kudos to the DevOps and technical support teams for managing it! 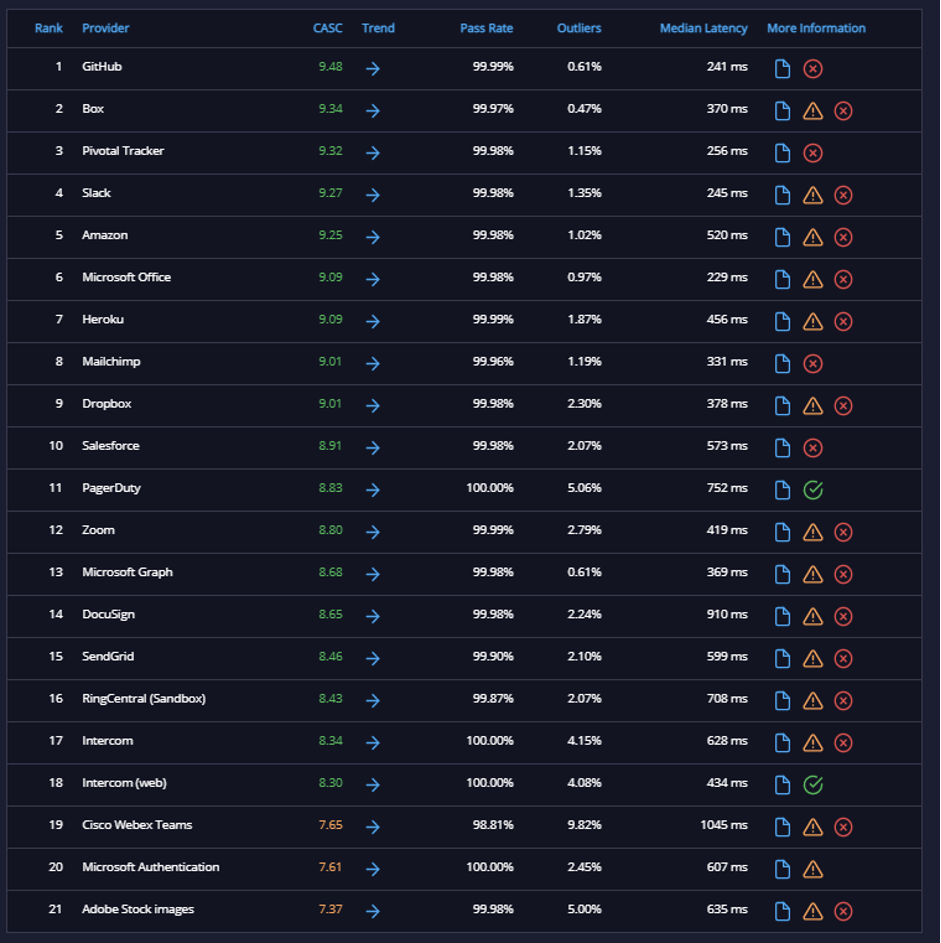 GitHub is a Daley Thompson amongst Corporate Infrastructure APIs. It might not be the best at any one metric, but it is a supreme all-rounder. If you want to be good, you need to available, fast and reliable. And you need to know that you are and the way to know that is to monitor the APIs you care about using an active API monitoring system.

If you aren’t doing that, you won’t know how your Corporate Infrastructure APIs are performing for end-users around the world and you won’t be managing your APIs. 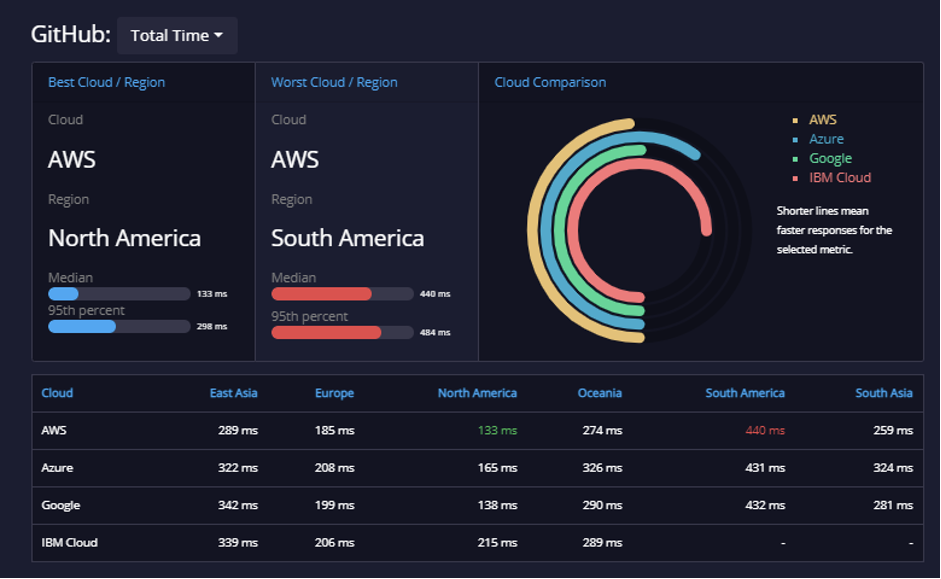 The Total Time for GitHub is pretty consistent across all regions with the exception, somewhat, of South America, where it is still only just 400 ms from all clouds (ideally, total time for API should be under 400 ms where practically possible). This is what a good API should look like.

Many Corporate Infrastructure APIs have users all over the world and you want to make sure that all your users have as similar an experience as possible whether they are in Shanghai or Sheffield, Montreal or Melbourne, Buenos Aires or Bangalore. And even if you have an API that is aimed at users from a particular country or region, it is not necessarily the case the user will access the API from a service hosted in that country.

Nine out of 21 APIs manage a CASC score of more 9.00 or more over the whole year, which is a good effort. Only three APIs are in the Amber Zone with Adobe Stock Images propping up the table with a CASC score of 7.37. Any Amber Zone API is in need of some TLC.

An API can always have a bad day (for instance, an outage) and that can ruin the CASC score for a week and a month. But if a Corporate Infrastructure API finds itself in the Amber Zone (or, worse, the Red Zone), week in, month out, it suggests that there is something badly out of kilter, something that urgent attention.

Most APIs are good APIs. There is no excuse for yours not to be too.

It only has a 99.98% pass rate, but it is its latency (635 ms, only 4 slower out of 21) and particularly the percentage of outliers (5.00%, only one worse) that help bring down. And if we look at how the Total Time varies between cloud and region, we see that, in contrast to GitHub, there is a huge variation in latency between regions.

Europe is by far the fastest region, North America is somewhat competitive, but the others, especially East and South Asia and Oceania are very slow. A latency of a second and a half or more is going to impact user experience significantly.

With such large differences between regions, looking at network configuration is worthwhile (any latency that can be squeezed out that way is always going to be worth it), but investigating whether it might be worthwhile to host the service in multiple regions will undoubtedly pay the largest dividends in terms of latency, user experience and CASC score.

API.expert gives you a high-level overview of how some of the most important APIs are performing. If you need more detailed information or you would like to monitor your own APIs or APIs you care about, please get in touch with APImetrics. We’d be delighted to discuss how we can help with your API monitoring and intelligence needs. We are publishing API.expert: State of the APIs 2020 on each of the categories we study.  And don’t forget look out for our weekly and monthly financial and non-financial API.expert reports!