For our API ratings, we look at over 100 APIs and pull all the metrics together to give you a general feeling for the service quality for an organization’s APIs in a particular API ratings category with our patented CASC score.

All of the APIs are very firmly in the Green Zone, and 8 out of the 10 of them have a CASC score over 9.00. LinkedIn might be propping up the API ratings category, but is still one of only two APIs to manage a 100% pass rate. It is let down by being somewhat slow, but mostly having a lot of outliers at 4.97%.

There is no direct correlation between being slow and having a lot of outliers. A slower API can be just as reliable as faster. Etsy has an excellent CASC score of 9.36 despite being the slowest API in the category by over 300 ms with a median latency of 804 ms.

Etsy has a 100% pass rate and 0.74% outliers, the third-best in the  overall API ratings category. 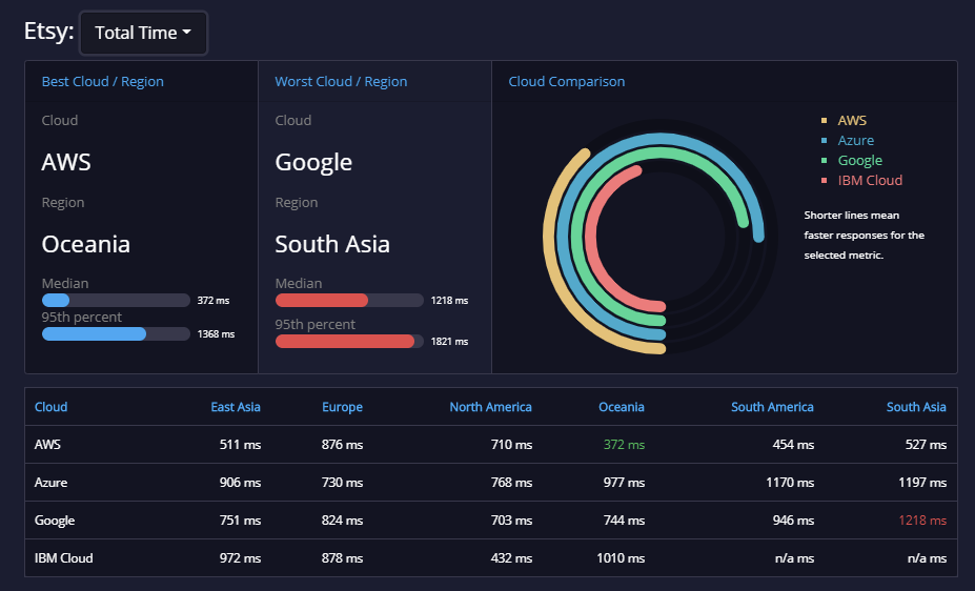 Now, an interesting thing is how fast Etsy is depends a lot on where you are calling from, and Etsy is fastest from AWS Oceania.

That strongly suggests that Etsy has a host on AWS Oceania and probably in AWS East Asia, South America and South Asia (AWS South America is the second fastest location).

In Europe though, AWS is the third-slowest cloud, only 2 ms behind the overall slowest. So there is plenty to chew on for Etsy here.

Yes, they have a very solid API, but it could be truly Best in Breed if they could sprinkle some of that AWS Oceania and South America over the other locations.

Department of Justice in the US Government category takes the overall API ratings title this week with an excellent CASC score of 9.90.

This week, all six categories are topped by an API with a CASC score of 9.27 or more.

Department of Justice in the US Government takes the overall title again with a median latency of 47 ms compared to 53 ms last week.

An important caveat: medians can be misleading! An API might have a fast median latency but produce many slow outliers. So just being fast isn’t everything. You have to be reliable too if you want to have good APIs and get a high CASC score!

NHS in the UK Government category takes the overall Wooden Spoon again this week with a CASC score of 6.42, down from 6.67.

We launched API.expert (http://api.expert) earlier in the year as a simple way to provide everybody with insights into the API economy and the leading APIs in different categories in particular. We are expanding our coverage of Open Finance APIs from around the world, so one of the major changes we made recently to these round ups has been to pull out the financial APIs.

See you again in a week as we look at API ratings for the end of November. Also, don’t forget to look out for our monthly report for October and the weekly and monthly financial API reports.

If you have any questions, please don’t hesitate to reach out.